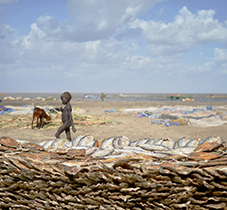 TOPSHOT – A boy from Kenya’s Turkana county walks past a stack of flattened fish being dried in the sun on March 24, 2017, near Lowarengak on the western shores of Lake Turkana, northern Kenya.
Lake Turkana has gradually receded in recent years leading to diminished fish stocks and territory that has forced traditional communities on the eastern as well as the northern shores, in Ethiopia, of the world’s largest permanent desert lake within undesired proximity of each other regularly ending in deadly clashes. / AFP PHOTO / TONY KARUMBA (Photo credit should read TONY KARUMBA/AFP/Getty Images)